Enjoy Spring in Guadalajara with Big $$$ savings on tuition! 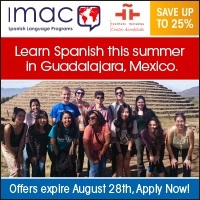 “Leading city” is the Mexico City’s slogan. It has the largest metropolitan area by population in North America. 25% of the country’s richness is concentrated here. The Mexico City’s subway provides safe transportation with 175 stations. Despite having a reputation as a polluted city, the environmental strategies implemented in the city were internationally recognized as the best in 2010 among 800 cities. Mexico City offers the widest variety of domestic and international shows. It is also the media headquarters and the government seat. Mexico City has hundreds of museums, markets, universities, and interesting districts for everyone.